The Apple G4 Cube Speakers have the following annoyances that this page seeks to remedy:

This page describes a series of hacks to fix these problems.

Making them work on all computers

The fact that only the headphone output works on most computers is actually a driver problem, not a power problem as some forum posts may lead you to believe. For some Mac OSX versions, this can apparently be fixed by installing an older version of the Audio driver.

It is likely an energy-saving measure, since the amplifier draws quite a bit of power.

The fix is fairly simple.

This is the digital audio amplifier that is hooked up to the speakers.

This is basically a single-chip USB audio adapter.

The datasheet for the Tripath chip has the following to say about pin 11:

This pin is likely being toggled by the Micronas chip, based on input from USB.

We can simply disconnect pin 11 from the circuit board by gently lifting/prying it off with a small screwdriver (gently! don't break it!), then soldering a wire from pin 11 to any place on the board with +5 volts. +5 volts is available from a bunch of locations, including pins 3 and 8 on the Tripath chip (more difficult to solder) and the point of contact of the thick black wire with a red stripe coming from the USB cable (easy to solder). 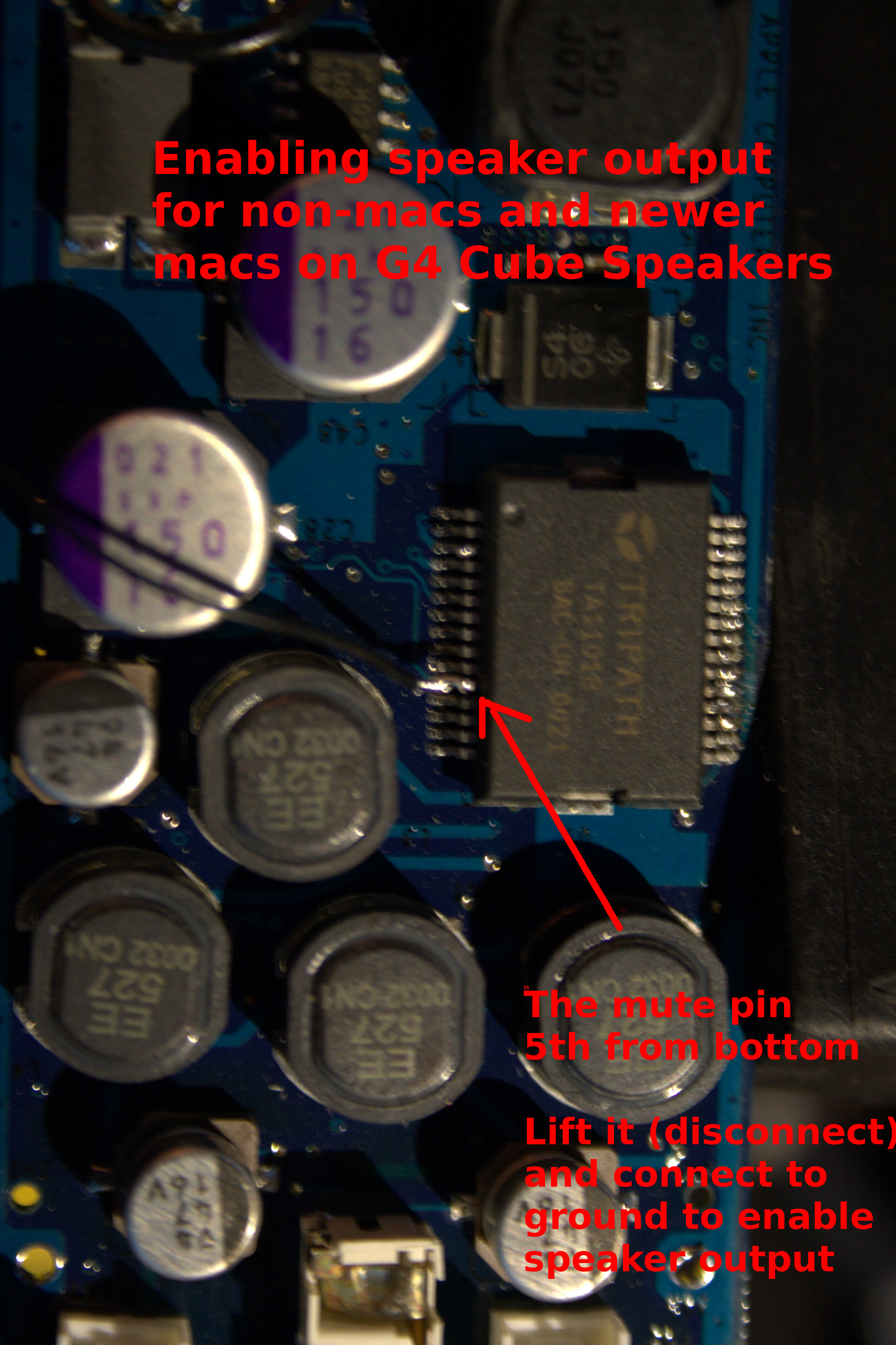 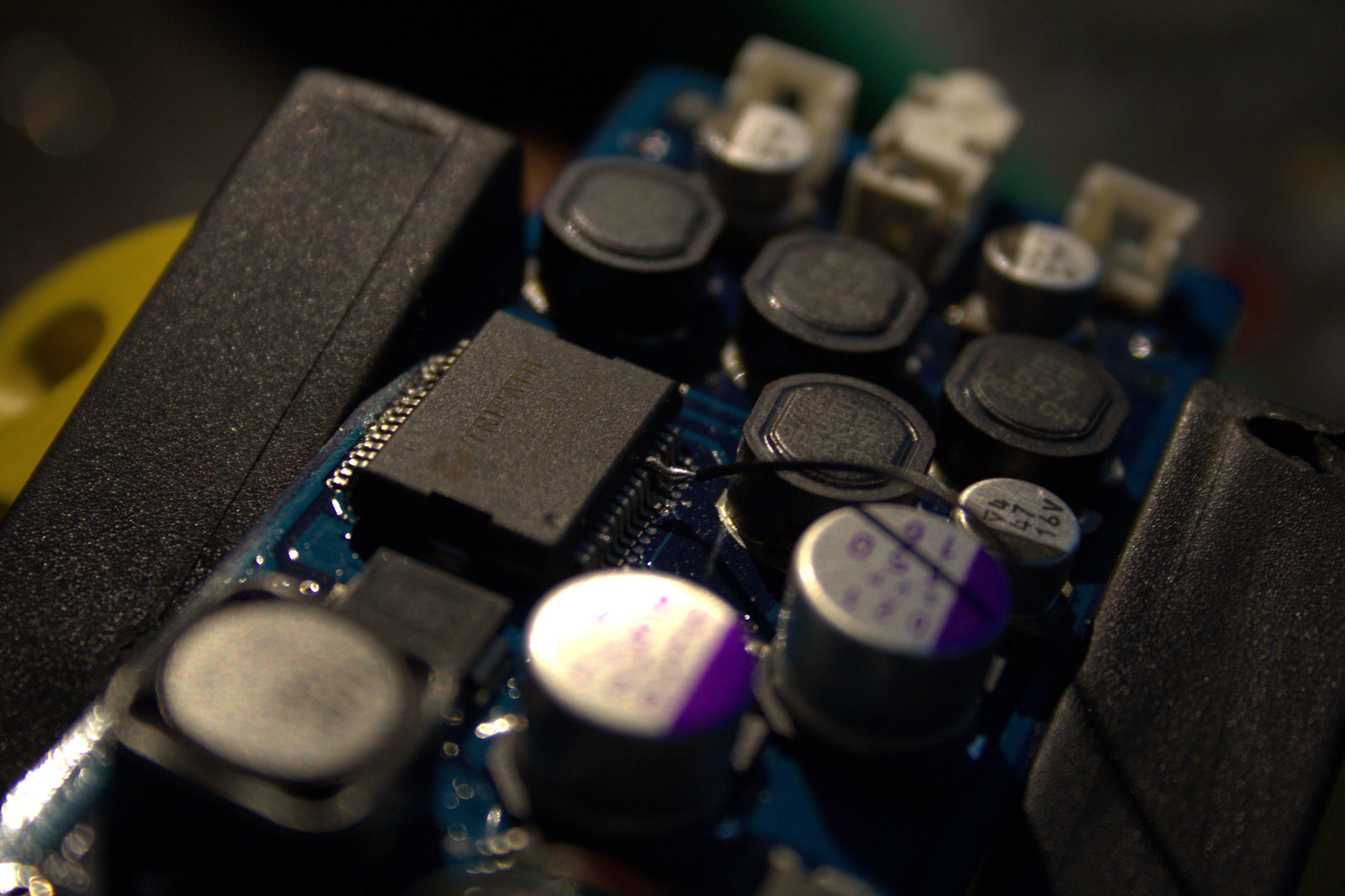 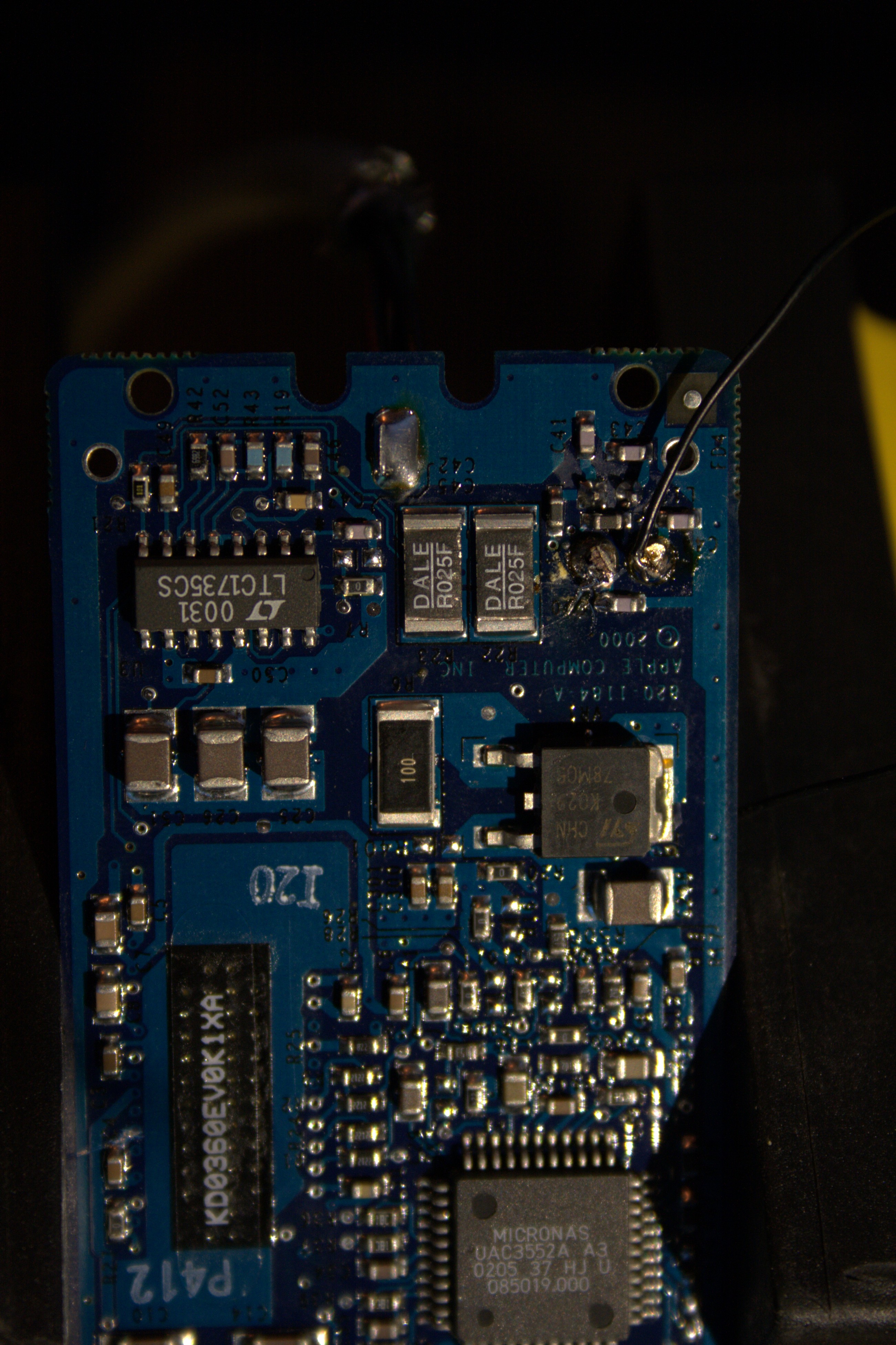 Other end of mute pin wire soldered to ground.

Now the amplifier will never be muted and your speakers should work on any modern GNU/Linux, Mac OSX or Windows computer, without installing any special drivers.

The G4 Cube speakers need more power than a normal computer can supply over USB in order to function optimally (and not be very very quiet).

So-called USB charging ports can deliver up to 25 watts. These are sometimes referred to as USB+ and will often remain powered when the computer is in standby mode.

Apparently special high-powered USB3 ports will be able to supply up to 100 watts, according to the USB power delivery specification, but I haven't seen any devices with support for this yet.

Currently, more power can be supplied in the following ways:

The G4 Cube has them. I have been told that some other Macs have them, but I don't know which.

Similar to the G4 Cube port, but standardized and only available in newer computers.

Some (most?) of these can deliver enough power.

The last one is actually fairly simple. Simply cut the black wire and red-striped wire coming from the USB cable and insulate the USB-cable ends so they don't end up touching each other or anything else (it's a good idea not to cut both wires at the same point). Then solder a connector or power 5v DC power adapter directly onto the two little bits of remaining wire sticking out of the board (make sure + goes to the red-striped one).

The Micronas chip has the ability to amplify an analog signal, meaning that it could be used as a general-purpose amplifier for e.g. a portable mp3 player, while still being powered over USB.

Micronas chip pin 33 (called AUXEN) should be set high to enable this feature, and another minijack port should be soldered onto pin 36 (AUXL) and 37 (AUXL) of the Micronas chip.

Apparently minijack ports exist which include a built in switch that could then be wired up to AUXEN to automatically turn it on when a minijack is connected. AUXEN could also be set permanently high, but the board will never go into power save mode while AUXEN is high (and it draws quite a bit of power). A better solution might be to install a switch.

If there is both analog input and digital input (from USB) then the two signals will be mixed.