This page is for documenting research on access to computers and Internet in Oakland, active organizations tackling the digital divide, and local ISPs that allow for sharing bandwidth in their Terms of Service.

According to the US Bureau of Labor Statistics & Bureau of Census, 32% of Oakland residents lack internet connectivity, with an additional 5.6% connected elsewhere but not at home.

The Free Press published a short report on media inequality in the Bay Area in January of 2014. From the report: 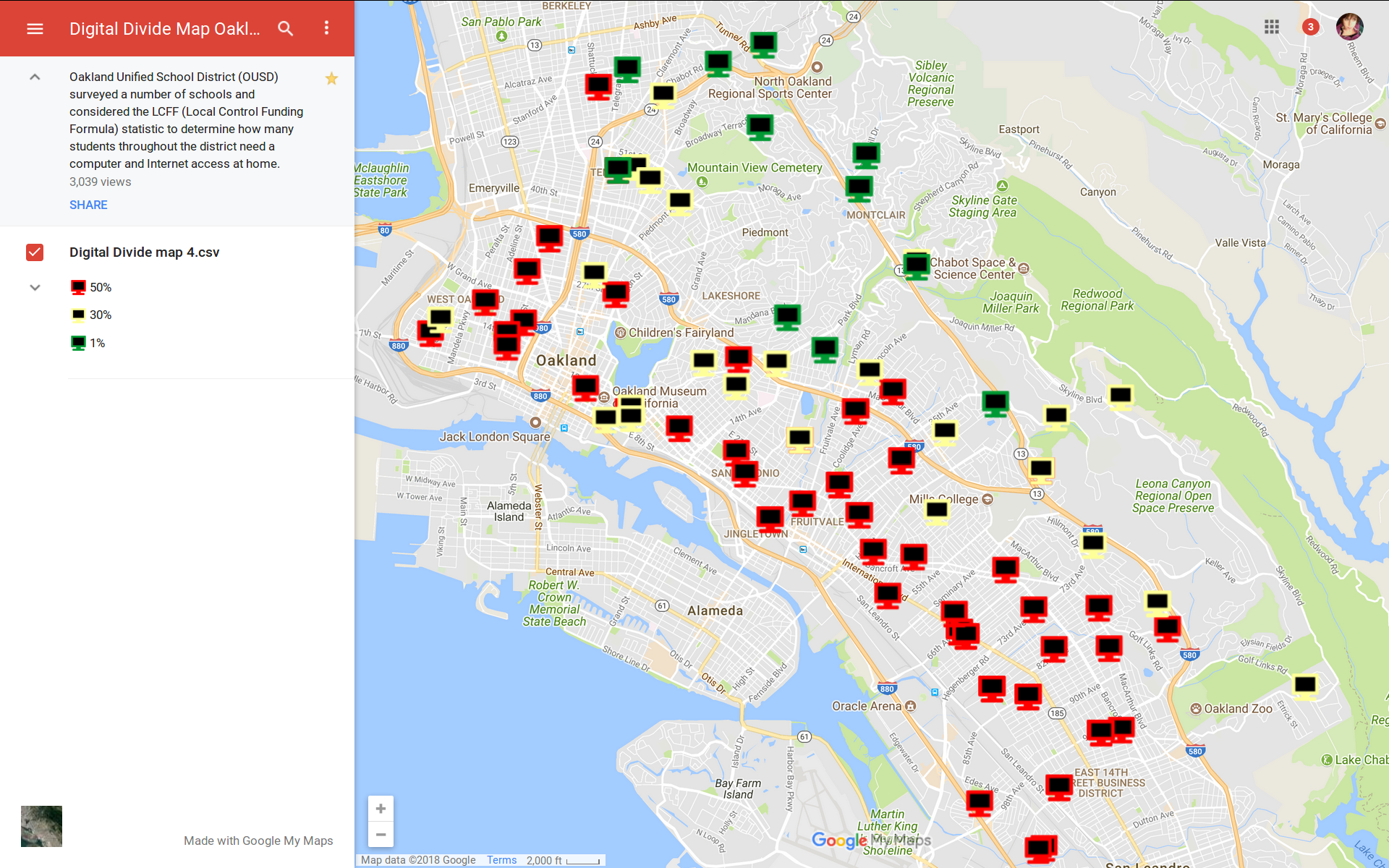 "'I feel a little different, because some people at my school do have Internet access at home' said Stewart, age 13. 'They donâ€™t have to worry, cause they can go home and do it. But I canâ€™t.' Stewart is not the only student in Oakland who faces this kind of difficulty. According to a study conducted by Oakland Unified School District (OUSD) in August and September, 14,097 students do not have computers and/or high-speed Internet access at home. That represents about 40 percent of the student population in Oakland."

City of Oakland Wireless Broadband Feasibility Study (2009) - Lengthy report on the feasibility of providing free municipal wifi throughout the city of Oakland. Research included focus groups with representatives from the various districts of Oakland, public comments, and extensive mapping of a wireless network operating on the 2.4GHz and 4.9Mz bands.

Complete coverage of the City and mobile access to real-time data was not seen as a necessary technical requirement by most groups, however both were particular priorities of City staff. Both requirements will have to be met if City of Oakland departments are assumed to be regular users of any citywide wireless broadband system. Additionally, there was a general concern expressed during most focus groups, the town hall meeting and some workshops that all areas of the City be served equally, if not fully. (p.18)"

We've been working on a spreadsheet of Oakland community organizations [grassroots, schools, churches, non-profits, etc], which can be found here.

The following is a curation of organizations addressing the digital divide in Oakland (via Oakland Wiki:

The ISPs in the East Bay that allow Internet Connection sharing (that we know of) are:

From deprecated Mesh/Communities page (needs merging with above).

Hooking up library catalogs would be rad... and libraries are the last bastion of nurturing public spaces.

Public wifi on the streets and in parks

It may be possible to get seed funding or community outreach help from organizations that are working to end the "digital divide."

These projects are headed by friend's of the mesh group and could plug in in some really interesting ways:

No contacts, but seem interesting:

Map of the Backbone Fiber, Data Centers and Free Wifi in Oakland and Berkeley

Map of the East Bay

Dark Gray Dots = Locations that would benefit from free internet