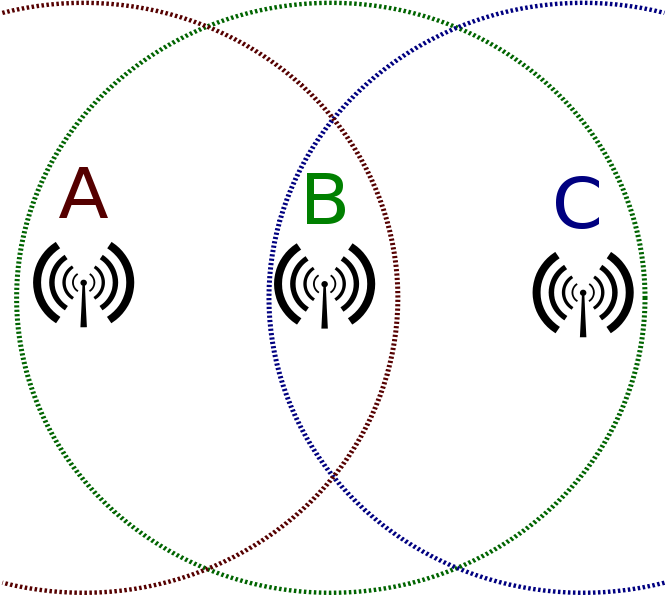 Depiction of the hidden station problem for media access control in IEEE 802.11. Station C is sending data to station B. Station A wants to do the same and listens for other frames being sent. Since it is out of the range of station C, it does not notice its frames and thinks the media is free. The result is a frame collision at station B.

Wireless networking protocols must accomodate this fact. If all of the nodes are within range of eachother, the simplest method is for each node to listen for a signal and then only send its own signal if it doesn't hear anything being sent. However, if not all of the nodes are within signal distance of eachother, there exists an issue wherein nodes can talk over eachtother thereby interfering with communications.

One solution to the hidden node problem is for each node to check with its intended recipient to see whether or not it is clear to send. Only after the sender recieves a confirmation to send does it begin transmission. This adds latency as for each packet sent, the sender must first check to see if the air is clear.

The Fresnel Zone is a football shaped radio wave path whose implications are important in finding optimal signalling. There are an infinite number of "zones" which are concentrically spread out. As radio waves travel from transmitter to receiver, they can be reflected off of physical objects and off of eachother. As waves are reflected, their timing can be affected. Therefore, some of the waves will arrive out of phase and interfere with the reception of the signal.

The first Fresnel Zone contributes to the most in-phase signalling, while the second zone can contribute to more out of phase signalling. It seems like a good rule is to keep the first fresnel zone as clear as possible, with leeway up to about 20%.

The concept of the Fresnel Zone is why in long distance point to point communications, elevated antennas serve better than antennas on the ground even when there is direct line of sight. For example, if two people are standing on opposite sides of lake merritt and can see each other, the signal between their two antennas might still be greatly interfered with. To visualize, imagine standing on one side of the lake and seeing an enormous football shaped 3d pattern connecting on two ends your antenna and your friends. Likely, the bottom half of the football shape would be mostly in the water and therefore obstructed. If you were able to elevate the antennas on both ends, your results would likely be much better.

The wikipedia article has a formula for calculating the fresnel zone radius at any point in between two endpoints. I believe there's also software which incorporates the Fresnel Zone into mapping and planning nodes.

Multiplexing is the process of carrying multiple different signals over a shared medium. If multiple nodes are to share a limited number of paths between them, they have to figure out how to send them in a way that does not interfere with each other's signals. A variety of methods allow concurrent connections to be maintained between multiple nodes sharing a single line. Multiplexing techniques allow for better efficiency of bandwidth usage with a minimum of signal collisions. 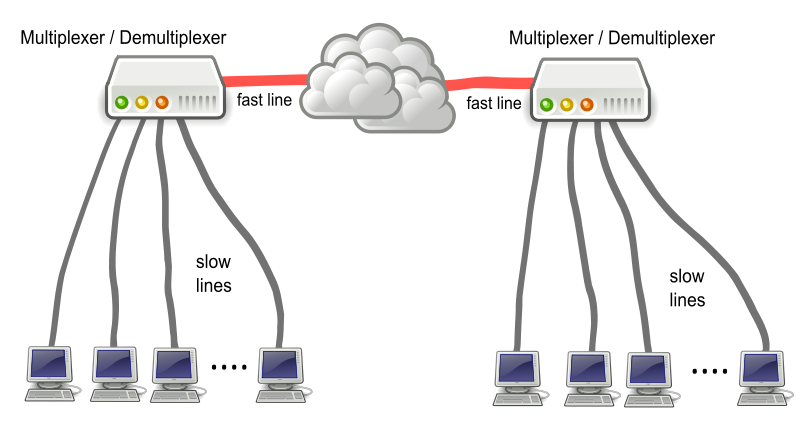 Time Division Multiple Access is a form of time division multiplexing. In time division multiplexing, connections are divided into specific temporal frames. Each individual connection is then assigned some fraction of the frame. Assume node A and node B are attempting to talk to eachother and node C and node D are also attempting to talk to eachother. If they are all within range of eachother and they try to communicate at once, they will interfere with eachother's signals. If instead, they pick a frame size of 100ms and divide that frame between the two connections, node A and node B can communicate within the first 50ms and then node C and node D can communicate within the second 50ms. This scheme is then scaled to incorporate many nodes. 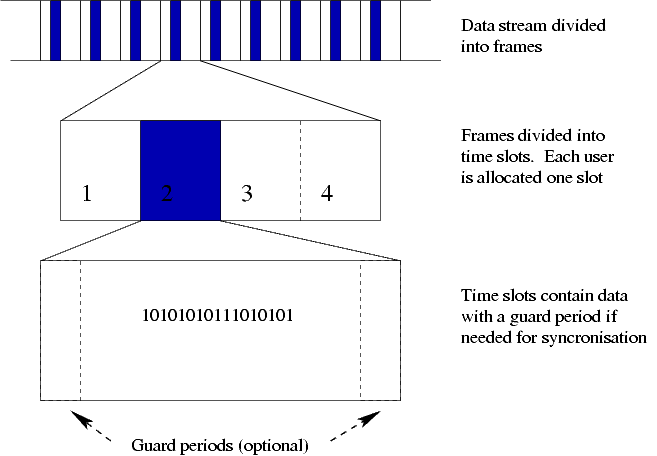