Oakland City Council is trying to create a mass Orwellian surveillance center (called the Domain Awareness Center), that would allow police to track all residents and visitors. This center would centralize surveillance camera footage, phone calls, licence plate readings, and social media information for use by local and federal law enforcement. This will most likely lead to drones and facial recognition technology. The Department of Homeland Security is behind this project with a $7 million dollar grant to fund it. In the wake of the Oscar Grant, Trayvon, and Occupy revolts, as well as the continuing push by local elites to gentrify the bay area, such a project is paramount in the suppression of the local population. The ACLU, the Electronic Frontier Foundation and even the NY Times all agree that this is an unprecedented attack on our civil liberties. 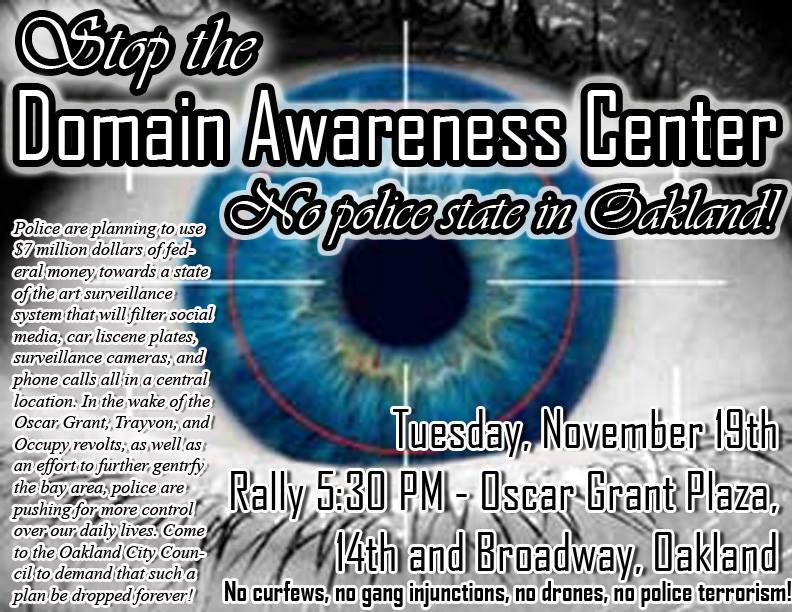 The NY Times basically warned its readers of the larger implications of these systems as they can spread to more cities. Oakland will be the leader in this tactic and it is a shame the city council has already gone forward as much as it has.
We are organizing for a community response and rally for this Tuesday at City Hall to SHUT THIS PLAN DOWN!
Please attend the organizing meeting this Saturday at 6pm to help us increase our numbers and make an impact. Recently we have seen working class people of color and activists from Oakland fight successfully against the proposed youth curfew. If we bring enough people to City Hall, we can stop this!!!!
Thanks for all your good work,
-Zaigham
P.S. We will also discuss an upcoming protest in SF: Mass March Against the NSA
Articles: http://www.nytimes.com/2013/10/14/technology/privacy-fears-as-surveillance-grows-in-cities.html?pagewanted=1&_r=0
https://www.eff.org/deeplinks/2013/08/oaklands-creepy-new-surveillance-program-just-got-approved
Organizing mtg to stop Oakland’s mass surveillance system