We believe the Oakland City council is meeting on January 7th to vote to select a new contractor to implement Phase II of the Domain Awareness Center build-out (after SAIC was disqualified since it could not comply with the provisions of the Oakland nuclear-free city ordinance). The Privacy Working Group is organizing a protest on the day of the City Council meeting, so this get-together is to plan that demonstration. Right now thoughts are that we will meet at the Plaza at 5:30, there will be food at 6:15. then going in to the council chambers to speak out against the selection of a new contractor. (It seems like Motorola is the front-runner at this point.)

We also might discuss plans for demonstrations at City Council member houses complete with camera props, maybe even a drone!

On July 31st after midnight the Oakland City Council voted unanimously to approve allocating $2 million to continue to develop the Domain Awareness Center that would integrate surveillance cameras from all over the Port of Oakland, the city, BART, AC Transit, traffic cameras, and other sensors into a local ‘fusion’ center that could effectively track private citizens movements throughout the region. Video and data feeds from all over Oakland are to be aggregated and monitored at the DAC, then analysed with license plate recognition software, thermal imaging and body movement recognition software, possibly facial recognition software, and more, all with absolutely no privacy or data-retention policies in place, or substantive debate at the committee or council level about the program. November 20th, again after midnight, the City Council voted 6-1 to find a new contractor for the DAC after it came to light that the previous major contractor, SAIC, was involved in nuclear weapons development in contravention of Oakland’s nuclear free policy.

The Oakland Privacy Working Group and others are continuing to organize against these encroachments upon our liberty and privacy.

If you are interested in joining the Oakland Privacy Working Group listserv send an email to this address:

The meeting will be at the sudoroom, 2141 Broadway, but the entrance is actually on 22nd Street upstairs. 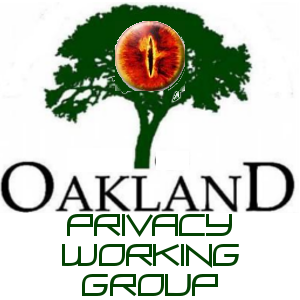