Behind the scenes at the BACH Unconference 2014

While people ran about hacking the planet to make it a better place for animals, small children, totally happy moms who do more than their fair share of the housework, there were a fair share of small workshops on how to reach out into the community and make technology more actionable, accessible and fun!

We stopped by the soldering workshop with generous tools donated by Mitch from Noisebridge (check out the monday soldering nights if you’re ever in SF)… we all have wanted to learn to solder, but stuff just always kept getting in the way.

Plus, let’s be honest–sometimes soldering workbooks have been kind of stuffy, so it was cool to learn on these cute French electronics kits! Let’s face it: while having in-depth conversations about facilitation, decision-making structures, conflict mediation and the housing crisis is vital – so is getting out and doing stuff. That’s what hackerspaces are all about!

All these things happened, but I was so busy doing stuff that I didn’t have time to take selfies! Soldering, cursing like a sailor, getting things wrong, crossing wires, saying the wrong thing, and then admiring small children of all color combinations controlling robotic arms in SudoRoom… how do wee ver  get anything done?

Here is the result: 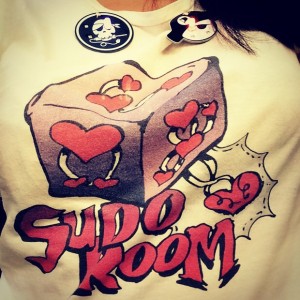 Hot Scenes from a soldering
Tagged on: bach

One thought on “Hot Scenes from a soldering”